Skip to content
Home/PhotoSophy Blog/Rejoice, there is still hope for humanity!
Previous Next

Rejoice, there is still hope for humanity! 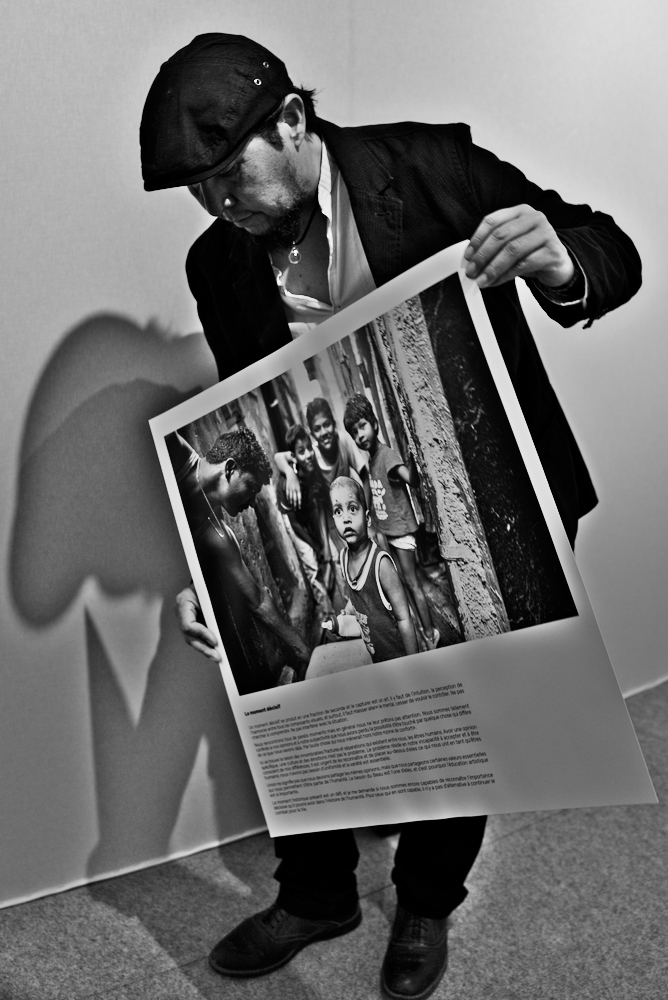 The world we knew is no more. The world is changing, and at first glance- not for the best. Everywhere we look around there is reason to worry: if it is about Politics, Ecology, Immigration, Art, Communication, Education, etc…. it seems that on a wide scale – to put it simply – Humanity is at stake.

There are enough reasons to fall into despair, but sometimes, when you least expect it, a spark of hope appears. This year in Paris, I had the honour of presenting three prints from the “PhotoSophy” series at the International Art exhibition of the “Salon d’Automne”.

Next to me in the exhibition was a strange guy called “AJ”. He came from Santa Fe in New Mexico, and presented some photos related to “Hidden Identities”. AJ stands for Abraham Jacob, and he defines himself as a “Navajo Ashkenazi” – his mother being one of the Navajo Indians of the native American tribes, and his father an Ashkenazi Jew from Europe. (Find him on Internet, search for AJ Goldman).

On the last of the four exhibition days I offered AJ that we exchange emails, so he gave me his business card on which was printed one of his photos, a photo I really liked. Receiving the card, I said “Great, I really like this photo” and he replied “It’s yours”. I thought he was referring to the business card, but I wasn’t sure and asked “You mean the card is mine, right?” and he replied : “No, I mean the photo”. I asked “Why?” And he said: “Because you like it”….. I replied “I see, and you don’t like my photos?”. He told me that he really liked one of them, so I said “Well, it is yours!”.

So at the end, I returned to Israel with one of his photos and he returned to Santa-Fe with one of mine. What is important here is the opening of the heart, the lack of egoist interest and calculation and the ability to share and offer a stranger something valuable to you, just because you discover that by doing so, you can increase happiness.

Humanity is still standing, and experiences like this one shows us that despite the craziness of our current times, there is still hope for a better future because an open heart is one of the most powerful weapons one can have.